We recently added the Canon 50mm f/2.5 Macro prime lens to our rental inventory.  Naturally, the first thing we did was take a picture of Kyle’s eyeball.  The second thing?  We compared it to the Canon f/1.4 50mm prime lens.  We wanted to know if it was safe to leave our 50mm f/1.4 behind when we have enough available light and the Canon macro lens in our bag.  And since the price difference isn’t huge, we think a comparison of these two lenses isn’t completely out of order.  Here’s some of the obvious and not-so-obvious pros and cons of each lens:

1) Up close, the 50mm macro is fantastic.  The 50mm f/1.4 is great for people, but if you want a closeup on a baby or pet, or are shooting anything smaller than about 9″ across, you’re really limited without the macro option.  The 50mm f/2.5 at close focus distance is 1:1, perfect for coins and jewelry. On a crop-factor camera, you’ll have even more apparent close-up power.

2) The 50mm f/1.4 is a much better available-light lens.  1 2/3 stops more speed makes a big difference in the dark.  On a crop-factor camera, f/2.5 is “good enough” for portrait work, but being able to go into f/2 or beyond gives you more versatility as a portrait lens. 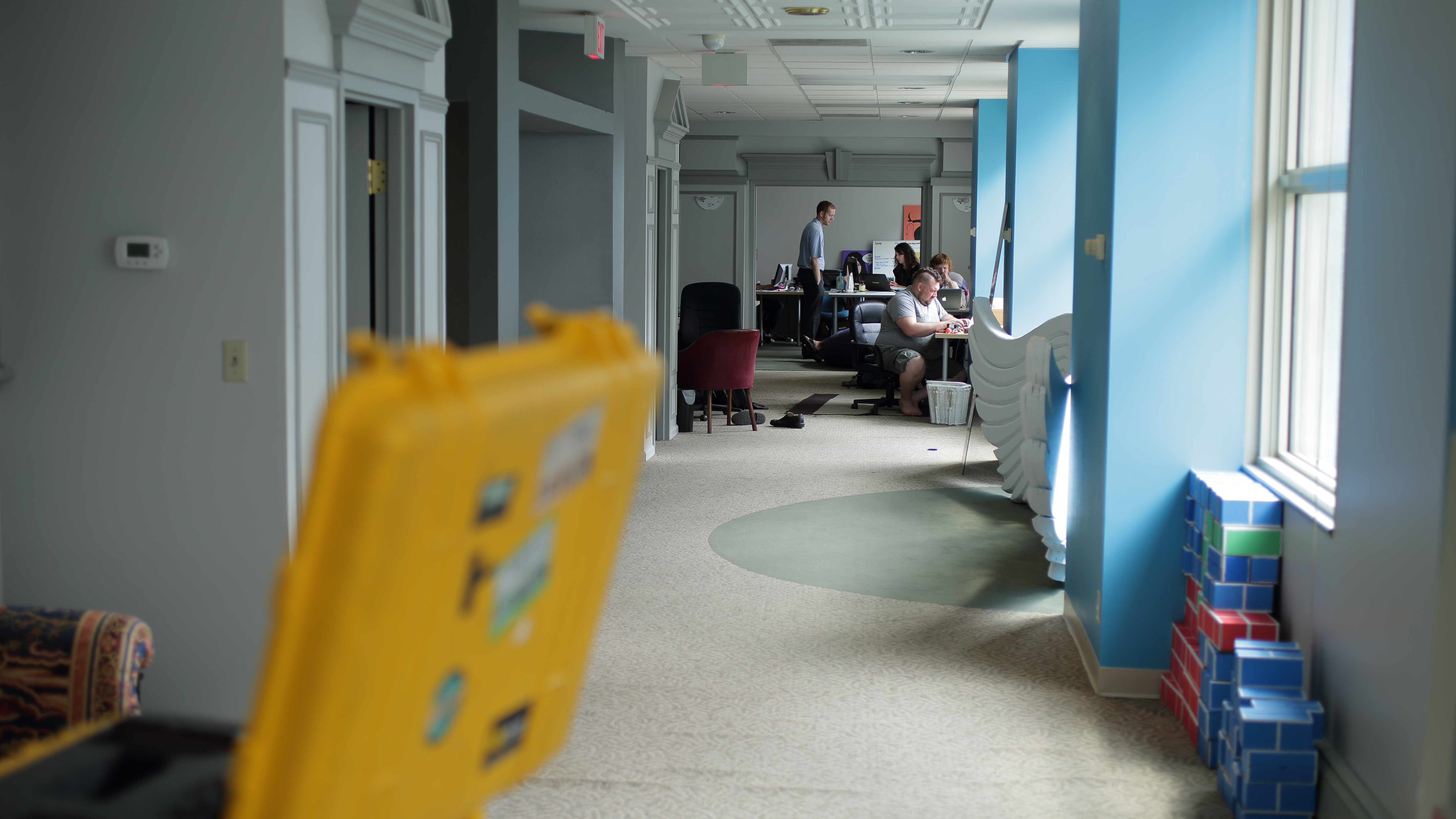 We tested both lenses with a Canon 5DmkIII body on a tripod at f/2.8, and focused on an object at the end of a hallway. We brought RAW images into photoshop with identical settings and saved them as high-quality JPEGs.

The biggest differentiator is sharpness.  Looking at the 1:1 comparison crops, the 50mm f/1.4 is much sharper.  Even in our video tests (2MP resolution), you can see a slight difference in sharpness between both lenses.  Note, in both images you can see artifacts from digital sharpening, but it’s the same amount for both shots.

The f/1.4 performs better in other areas, too.  In our tests, vignetting was much less noticeable on the f/1.4.  It has two fewer elements, which means that even at the same apertures, it lets in a bit more light.  Our guess is about 1/6th of a stop at the center and almost a full stop in the corners at f/2.8.

The only place where the 50mm macro might be said to have an edge in our sample shots is in geometric distortion.  When putting the shots over each other, you can see a slight barrel distortion in the 50mm f/1.4.  The additional glass in the macro may be helping to square up the optics, making it slightly more rectilinear.  This makes the macro seem the tiniest bit wider, at least in the corners.

In our high-contrast scene, both lenses seemed to perform reasonably well, without much ghosting or fringing, and a small amount of  chromatic aberration.

For video shooters, both lenses seem to breathe about equally.  Our opinion was the breathing was pretty natural, and certainly acceptable for a sub-$1000 lens. 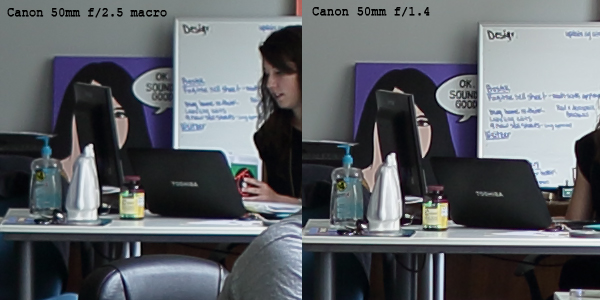 The upshot?  It looks like we’ll be taking both 50mm lenses along on our shoots.  The macro features are too awesome to leave at home, but the better optics of the f/1.4 make it a much better choice on almost anything more than 18 inches away.  Want to make the comparison for yourself?  You can rent all our 50mm lenses for your own tests!