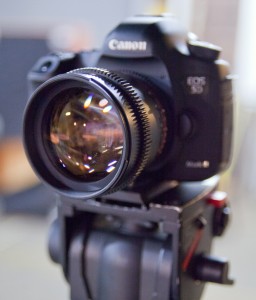 I’ve been using the Rokinon as the 85mm in my prime lens kit since it came out earlier this year, and it’s been getting noticed a lot lately.  Here’s where I like it, where I don’t, and when it gets used the most.

The 85mm is about as fast as you could reasonably need in any lens.  There are 85mm f/1.2 lenses made by Canon and others, but the 1/3-stop difference isn’t as important as other lens features.  The lens is sharp enough for 1080p even wide open, and starts approaching near-perfect sharpness for stills around T/2.8.  It’s actually a pretty nice photo lens for portraits if you don’t mind the manual focus.  Bokeh is very pleasing, and a bit more circular than the Canon f/1.8, but not as perfectly round as the Canon f/1.2L.  It also flares a bit less than the 85mm Canon f/1.8.  The flares are also much more cinematic.  If your goal is JJ-Abrams-style intentional flares, this lens really does well.

The standard lens gear is much nicer than aftermarket gears or traditional cine-mods.  There is nothing to slip or drift, and pulling focus is always smooth and natural.  It also has hard focus stops at near focus and infinity, so you don’t have to re-mark your follow focus like you would for photo lenses.

As most video shooters know, precision control over exposure is welcome addition.  The de-clicked aperture allows you to easily fine-tune your iris without even thinking about how many stops you’re going in either direction.  I found that taking the numbers and clicks out of the equation completely allowed me to focus on making the image look better, not what F-stop I thought should look best.

If you’re looking to shoot more stills than video, the 85mm f/1.8 from Canon is probably a better choice.  The autofocus and superior sharpness wide open make it a better lens for portraits at f/2.  If you’ve got budget, the Rokinon can’t come close to the 85mm cinema primes from Canon and Zeiss.    It’s an unfair comparison, of course, since you can buy a complete set of Rokinon lenses for less than the cheapest cinema lens from Canon.

The lens does breathe a bit on focus pulls.  We didn’t mind it much in our testing, but it’s much more noticeable than a Zeiss 85mm CP2, for example.

If you’re the type who wants all of your prime lenses to match, Rokinon can’t help you yet.  With a big gap at the 50mm spot, there’s no way you can make a complete Rokinon prime kit.  The reality is, at this price point the Rokinon lenses probably won’t be a perfect match for color, anyway, so switching to a 50mm cine-modded Zeiss Planar T* isn’t a big deal.

When I Use It

For budget DSLR video shoots, a full set of cinema primes can be out of reach, and zoom lenses often don’t have the speed for indoor shoots.  I have been loving the 85mm T/1.5 on a Canon 5D mark III for interviews, where the focal length is perfect and the limitations of the lens hardly matter.  The T/1.5 really lets backrounds fall off a lot faster than f/1.8 lenses.  It’s also a great lens for getting more candid moments at parties and events indoors, where you need some reach from your focal length and still need to be able to expose in near-darkness with only available light. 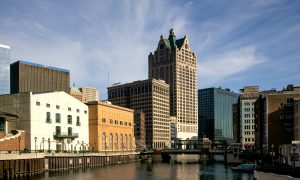 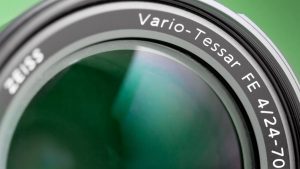 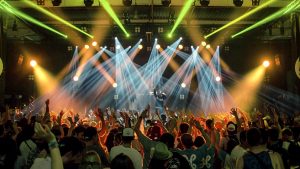