This is part one in our “Exposure for Video” series

When shooters talk about speed, they’re really talking about light.  Light is measured in stops.  If lens A lets in twice as much light as lens B, lens A is one stop faster than lens B.  If it lets in four times as much light, it’s two stops faster.  So, if we “stop up” or “open up” we are adding more light and if we “stop down” or “close down”  we are taking light away (relative to where we started).  All lenses have a maximum aperture (also called iris size or f-stop), but can be stopped down to reduce the amount of light coming in. 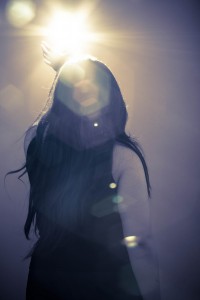 Photo: flickr/sodaniechea
In some images, you can actually see the iris in the photograph. Here, you can tell the iris has six sides, making hexagon-shaped lens flares.

Lens speeds are measured in f-stops.  Don’t confuse a stop with an f-stop.  A stop is half or double a certain amount of light.  An f-stop is the measurement of the diameter of the iris in the lens.  They are related, but not the same.  I’m going to explain this with some math, please bear with me.  If you can commit it to memory, you’ll be halfway to being a professional shooter.  If it bends your brain too much, just skip to the chart and try to memorize the pattern.

The F-stop is a ratio that measures the iris diameter relative to the focal length f.  That’s why it’s represented as a fraction, f/x.

The cool thing about exposure is that as long as f is a constant, it doesn’t matter what it is. We can ignore it for this example, just remember that the number we’re focusing on is the denominator in a fraction, so a bigger denominator is actually a smaller number.

If I double the diameter of a circle, the area of a circle will become four times as large (remember that πr² equation from geometry class?).  So if I double the diameter of the iris by going from f/8 to f/4, the iris gets four times bigger, and will let in four times as much light.  Four times the light… that’s two stops (because 4=2×2).  Eight times the light?  That would be three stops brighter.  One sixteenth the light?  Four stops darker.

Now, as promised, the chart of f-stops:

What does it mean?  It means that there is a one-stop difference between f/1 and f/1.4.  There is a three-stop difference between f/1.4 and f/4.  And you can extend the imaginary chart out as far as your mind wants to go by just doubling or halving the f-stop ratios.  If you want numbers in-between…. you’d better bust out your geometry textbook (or use an f-stop calculator).  To be practical, we’ve never seen an f-stop beyond f/0.7 on the open side or f/32 on the closed side, and optics tend to get a little crazy as you approach extremes, anyway.

Remember, the iris (aperture/f-stop/whatever you might call it), is just one of the four parts of exposure.  You will need to combine f-stop, shutter speed, sensitivity, and the amount of light in the scene to get the full equation.  The good news?  F-stops are the tricky part!  The rest gets much simpler.  And now you have one of the tools to compare two lenses side-by-side.  We’ll have more information on exposure in our next installment in the Exposure for Video series.