This is part two in our “Exposure for Video” series

Shutter speed is one of the variables that helps control exposure and the overall look of your video.  If you’re an amateur photographer, you might be familiar with shutter speed, but there are some key differences between photo and video.  Frame rate also factors in for moving images.  Let’s start with frame rates first.

The video frame rate is the number of images (frames) shown per second.  We abbreviate this FPS.  This can be anything from around 12 (the minimum to “fool” the eye into seeing motion) to more than 1000.  But film and video have converged around a few standards.  Here are the ones you should try to remember:

I’m sure whole books could be written about why some of those frame rates seem so ridiculous, but the difference between 30 fps and 29.97 fps is actually really important, I promise.

If you’re making movies or web videos in 2013, I strongly suggest shooting in 23.976 fps.  If what you do ends up on television, you’re probably better off with 29.97 or 59.94.  But let’s get back to shutter speed, which is the whole reason we started talking frame rates in the first place! 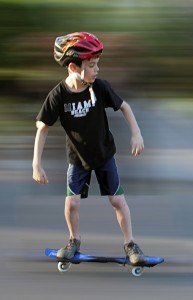 The shutter speed is the amount of time the frame of video is exposed to light.  The longer the exposure, the more light is recorded.  Of course, under normal circumstances, the shutter speed can’t be any longer than the time between one frame and the next.  So if you’re shooting 24 fps, the most light you could let into each frame would be 1/24th of a second.  Makes sense, right? Your shutter speed can be a lot faster, however.  most cameras will let you adjust your shutter to 1/8000 or so.  This would let in a lot less light.

Photographers have used fast shutters in millions of photos to freeze motion.  Since even fast-moving things appear relatively stationary over 1/8000th of a second, they can be “locked in place” without any visible motion blur.  Other times, photographers can use very long exposures to intentionally blur backgrounds or leave trails to indicate motion in a still shot.  But cinematographers have a different challenge.  Since video and moving pictures are all about capturing motion, each of the still images has to work together with the ones around it to create the illusion of motion.  The motion blur that photographers are often trying to avoid is the same blur that we can use to make motion seem fluid and natural.  The illusion of motion in moving pictures depends in part on the smooth transition from one frame to the next.  In modern video, we usually set a shutter speed at about half the frame rate.  In an homage to the film cameras of the 20th century, this is called a 180-degree shutter.

There are times when the 180-degree shutter might not be the right choice.  Sometimes you may be shooting something that flickers, such as a televison or LED clock, and don’t want to emphasize the flicker. Other times you may be shooting in such darkness that you’d rather have the extra motion blur and get all the light in every frame possible.  There is no shutter speed that is right 100% of the time, but I usually start at 1/50th (when I’m shooting at 23.976fps) and make adjustments as necessary from there.

There are artful ways to use faster shutter speeds, too.  In Saving Private Ryan, for example, the action scenes are shot with a 1/200th shutter, even though they are 24fps.  This tends to make the motion look “strobey” or stuttery, and reminiscent of old 16mm newsreels.

Remember that shutter speed is just one of the four variables that affect exposure.  We’ll talk about the rest as we get further into our “Exposure for Video” series.