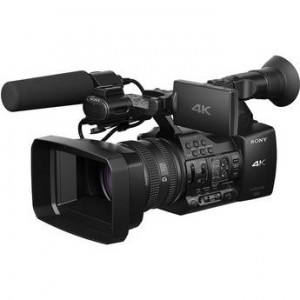 I was recently approached by Flipeleven Creative to direct photography on a promotional piece for the Skylight Music Theatre in Milwaukee.  The project proposal was creative, ambitious, and unique, and I thought it was a great opportunity to put Sony’s latest 4K camcorder through its paces, even if it may have seemed like an odd camera choice for the project.

The PXW-Z100 features 4096×2160 resolution with 4:2:2 chroma subsampling and 10-bit color, which made me feel pretty confident about using it for green screen and compositing shots.  We decided the promo would be a single composited shot, about 60 seconds long.  The foreground element would be 24 fps, and the background elements would be 60 fps, conformed to 24.  We matched the camera moves by accelerating the camera motion 250% in the 60 fps version.  With a limitless budget, I would have leaned toward a Red Epic with remote follow focus and a dana dolly, but we used a homemade PVC dolly and a camera package about a quarter of the cost.

The overall shooting experience went well.  The wifi control feature was very helpful, making it possible to start and stop recording and pull focus remotely.  The web interface for controlling the focus was usually very effective, but sometimes a bit twitchy. I ended up blowing about 20% of the takes due to the focus racking in the opposite direction I told it to.  Since we were shooting indoors, we shot at f/2, making focus more critical than most applications.  For version 1.0 of a HTML interface, the wifi feature is pretty impressive, but I’d love to see improvements as Sony updates the firmware.  The ability to control focus with a keyboard instead of sliders would be a nice touch.

We were shooting indoors under theatrical lighting, around 3000K.  Given the opportunity, I would have liked to have been closer to 5600K, since the camera seems to handle noise better at higher color temperatures.  We ended up keeping gain at 0 dB, but there was still visible noise in the 4K source footage, since a large portion of the frame was dark at any point in time.  An extra stop of sensitivity would have been appreciated, but the Z100 was adequate.  We shot flat, since we knew we’d be doing a very heavy grade in post. 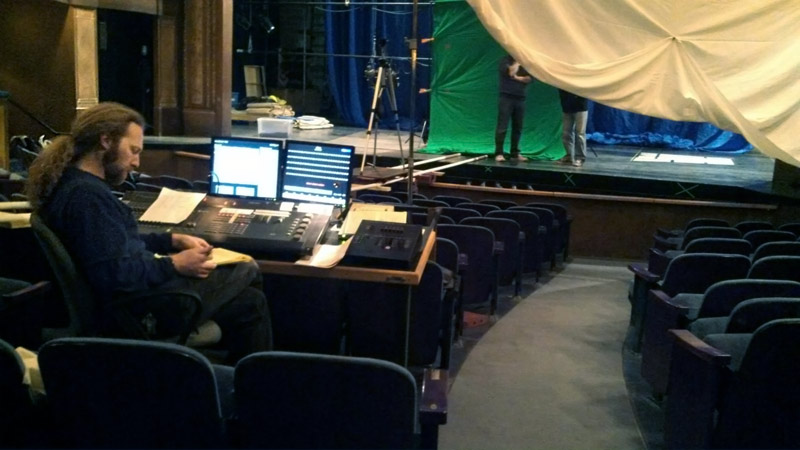 Phil Warren from Skylight handed lighting cues using the house board. The muslin drape was diffusion for the foreground subject’s key light. Kyle and I are hiding on stage. Photo by Chad Halvorsen.

After the shoot was over, it was time to try keying and compositing.  The first thing I realized was I should have turned sharpness completely down for VFX!  I had only done some very brief greenscreen tests with the camera before our shoot day.  Reviewing the footage, there was a two- to three-pixel band of black between our subject and the chroma green.  Fortunately, the matte choker handled it pretty well,but it would have been much better to add sharpness in post, since the Z100 seems to be pretty heavy-handed with the default sharpness setting.

The other “shoulda” on my list from this shoot was a smoother dolly ride.  We had to make a lot of tweaks to take out the wiggles as we hit the tiny junctions between PVC pipes, and the slight bend of the tracks made things a little more complicated.  A heavier camera would have meant a heavier dolly, making things smoother, but it might not have been possible to get 30 feet of steel pipe and a full-size dolly properly supported over the vintage seating, either.  Fortunately, the bumps didn’t seem to cause any rolling shutter artifacts, which was a pleasant surprise.

The keying experience was definitely much nicer than any non-raw camera I’ve used.  I think the results speak for themselves, so I’ll let you be the judge of the effect.  We had some serious green bounce from under the subject, but the camera’s codec definitely kept all the color information it got.  Some cameras (e.g. DSLRs)  have a fantastic sensor but limited processing power, encoding, and bandwidth.  Other cameras, like the Z100, have incredible recording ability, but are most limited by their sensor.  In this way, the Z100 reminds me of Panasonic’s HVX200.  I’m sure once Sony releases the lower bitrate options in a firmware update, most shooters will be happy trading high bitrates for longer record times.

Our deliverable was 2K resolution, but we did some substantial zooming and cropping in post.  The project turnaround was so fast, we didn’t have time for noise reduction, and subtle noise was added over all the elements as one of the final compositing steps.  Basically, I suggest you watch it as a complete piece, and don’t use this as a pixel-peeping comparison.

Special thanks to the incredible team at Skylight Theatre who teamed up with all my friends at Flipeleven to make this awesome promo!