Upgrading to the Red Epic Camera 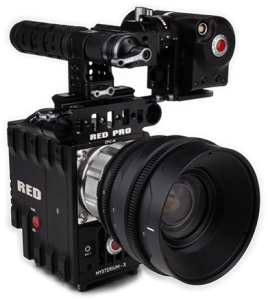 We added the Red Epic camera to our rental lineup to meet the growing needs of our customers in Milwaukee.  It’s our most expensive rental body, and one of the most popular, but it’s not the perfect camera for every job.  Since many of our renters are more experienced with DSLRs like the Canon 5D mark III, we wanted to mention some of the big differences between DSLRs and shooting on the Epic.

1) You’ll really, really want an Assistant Camera Operator.  Changing lenses is more difficult on a cinema camera than a DSLR, and you’ll probably have multiple accessories attached to the body.  Plus, you’ll have an extra set of eyes on equipment and someone to help you with the new menu.  If you’re shooting full days, we suggest at least two assistants, or one assistant and a DIT.  If you’re renting a Red Epic and need an operator, assistant camera, or tech, we’re more than happy to recommend someone.

2) Budget more time (and money) for post production.  Redcode Raw is great, but any raw workflow is slower than a traditional video workflow.  You’ll also need lots more storage than you’re used to.

3) It’s bigger and kludgier.  Of course, compared to a Betacam, it’s actually pretty small, but if you’re used to DSLRs, it’s not nearly as easy to move around.  One of the great advantages of a DSLR is how easy it is to “shoot from the hip.”  It’s hard to get that spontaneous feeling from a larger camera like the Epic.

4) It can be a bit loud sometimes.  On long takes, the fan may kick in depending on the camera’s temperature reading.  The computer will do what it can to avoid running the fan on high speed during takes, but be prepared for glares from the sound department if you’re only a few feet from the talent and running takes longer than a few minutes.  The second generation of fans has addressed this problem somewhat, but you’ll need to check with the rental house to find out which fans your Red Epic is using.

5) Almost all DSLR accessories and support are either too small, too consumer, or simply outclassed.  At a minimum, you’ll want the Red touchscreen monitor and some respectable camera support.  If you’re on a tight budget, you might find some cost savings with photo primes that have been cine-modded.  Our Nikon lens set won’t compete with a set of Cooke S4s, but will still be able to get crisp images, even shooting 5K.  You won’t need to triple your insurance coverage, either.

6) You’ll attract more attention.  Set up a 5D mark III in the middle of downtown Milwaukee and no one will even notice.  Bring a Red Epic and suddenly people stare.  If you’re shooting doc style and trying to be unintimidating, I suggest you tape over the logo and keep your rig as small as possible.  If you’re working on something narrative, this probably isn’t an issue.

If you’re used to a DSLR, the Red Epic will seem like a huge leap forward.  Just make sure you’re ready for it!