The SLR Magic Anamorphot 2.0x-50 anamorphic lens adapter is a game-changer for cinematographers who want to get the cinemascope look without a six-figure lens budget. I spent some time shooting with the 2x Anamorphot (after working with various 2x vintage adapters) and have a lot of tips and tricks to share to get the most from any anamorphic adapter rig. 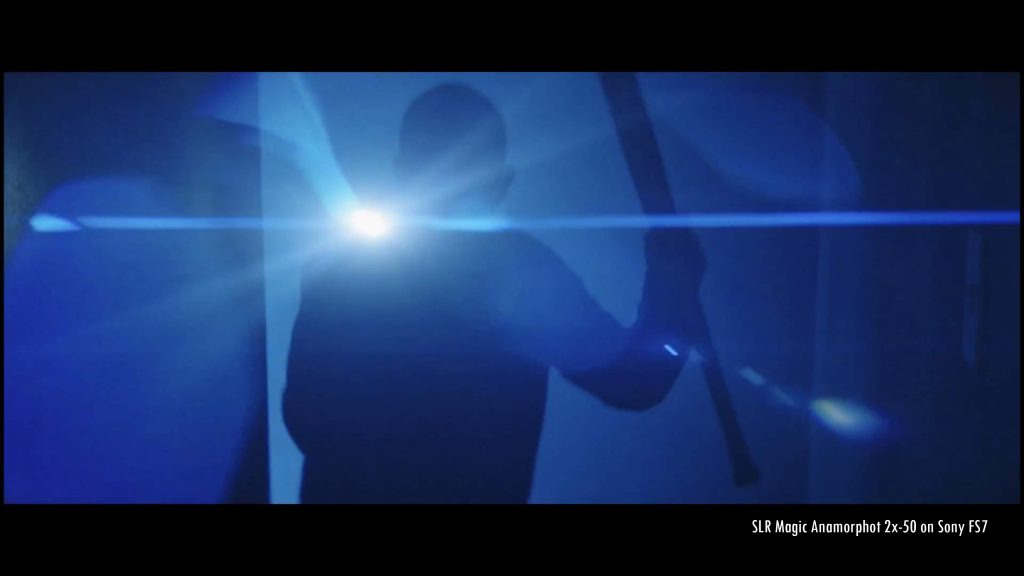 A frame from “Upstairs.” It was shot with a Sony FS7, a Zeiss 50mm ZE Planar T* lens with Metabones Speedbooster, the SLR Magic Anamorphot 2.0x-50, and Rangefinder. 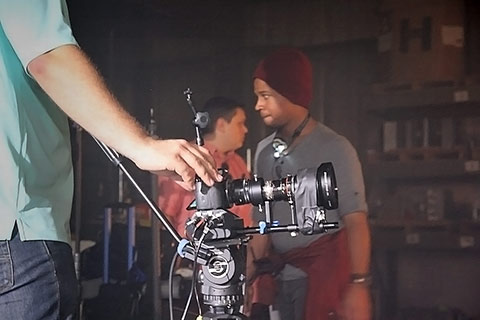 This is the crazy rig I started using for the short film High Beam. It’s a Panasonic GH4, with an EF to MFT speedbooster, with a m42 to EF adapter, a vintage Helios 44-2 as the taking lens, a modified lens hood for mounting the Bell and Howell anamorphic adapter, which had the adjustable diopter cine modified. Then on the end, to get wide enough, I resorted to taping on a 0.7x wide angle adapter.

I started my anamorphic journey with a Bell and Howell 2x super 16mm projection lens. Getting the imperial threads of the lens adapter to fit onto the metric standards in use on my lenses and filters took a few deep dives on eBay. Figuring out how to mount and support the lens was a lot of trial and error, too. There are a lot of tips online, but with any modified projector lens, you’re going to need to figure out what works best yourself.

I learned one big lesson from shooting on the Bell and Howell: try not to change lenses. While I had lots of options, I ended up shooting almost exclusively on the vintage 58mm Helios 44-2. Since changing the taking lens meant changing the length of the crazy lens assembly, as well as using different stepping rings, lens changes were a 15-minute ordeal. I found it was easiest to switch between a “dumb” adapter for my telephoto shots, a speedbooster for my middle shots, and a speedbooster plus a wide angle adapter on the front for my widest shots. I found the the character of the vintage lens helped forgive some of the softness of the adapter.

Paired with a vintage lens, the Bell and Howell gives one-of-a-kind visuals, although it was bordering on impossible to use. Courtesy of High Beam. Click image to view in 4K

The rig was very inelegant, but did create some gorgeous images. The size of the Bell and Howell was suited to a Panasonic GH4, not s35 or full frame sensors. On MFT, it seemed a bit soft in 4K. Even with the modification to the variable diopter focus, focus was a challenge. It also looked so ridiculous that I couldn’t possibly suggest it for a “proper” shoot.

Looking for something that would be a better fit for the Sony A7s II, I picked up a Lomo 35 NAP2-3m. It’s a massive beast of a lens. While it does allow for relatively wide lenses even on a full frame camera, close focus is limited to a ridiculous 6 meters. The front element is so huge that no variable diopter would fit. Some anamorphic lensheads have done extreme modifications to the 35-NAP2-3M, but to do it right means building your own lens housing. Even with modifications, focus is difficult and requires the dual-focus method. After trying a few test shots, I quickly realized that the Lomo wasn’t a good option for me.

SLR Magic is the only company making modern “budget” anamorphic lenses and adapters. The Anamorphot 2.0x-50 is designed to work with the SLR Magic Rangefinder for single-focus operation. It has easy-to-use metric filter threads on the front and back. Everything about it makes it a lot easier to shoot with than any of the modified anamorphic projection lenses. I decided to work with the 2.0x model, since it gives a much more distinctly anamorphic look than the 1.33x.

SLR Magic definitely has some anamorphiles on staff. Everything in their Anamorphot line has a blue lens coating, which amplifies the blue-streak flares made famous by filmmakers like J.J. Abrams. The glass definitely has a unique character, like nothing I’ve seen from any other anamorphic lenses. The Anamorphot 2.0x-50 is relatively sharp when used with the right taking lens. I used it a lot around f/4 with Zeiss ZE series lenses. To get a tack-sharp image, you need to be sure that your taking lens and the adapter are at infinity, your adapter is mounted squarely, and of course your front focus element needs to be spot on as well. It takes some time and practice before that all happens naturally.

Lighting requires a different touch, as well. In general, highlights are to be avoided, except for the intentional lens flares and bokeh-ed points of light. High-contrast areas on a face, for example, can “bloom” and cause an out-of-focus look.  In general, anamorphic shines most in low-key and night scenes. Getting the most from daytime exteriors usually means shooting low contrast, with a long lens and maximizing the oval bokeh effect.

After a few days of camera and lens tests, I’ve fine-tuned my ideal anamorphic adapter setup. I shoot on the Sony FS7, with an Atomos Shogun Flame to handle anamorphic de-squeeze and LUTs. A Zacuto Universal Baseplate provides a stable connection to rails (and gives the option to handhold the rig, if necessary). I use a Metabones adapter (not speedbooster). I found the speedbooster sometimes made focus even harder. I use Zeiss ZE lenses, or the Helios 44-2 for a more vintage look. The Anamorphot 2.0x-50 gets stepping rings to mount to the taking lens. I also use a Canon C-size tripod collar to help keep the adapter from rotating.

Playing with various lenses, I learned that the ideal taking lens has to have certain features. You need non-rotating front filter threads. Ideally, the lens maintains the same length when focusing. For full frame cameras, the front filter threads should be 62mm or smaller and the front element should be about 50mm or smaller. You can get away with slightly bigger numbers if you’re using full frame glass on a crop sensor.

Any comfort you have with lens lengths goes out the window with 2x anamorphic. Since a 50mm becomes a 50mm x 25mm lens, it can almost be wide and telephoto at the same time. Screengrab from Upstairs.

The Zeiss ZE 35mm f/1.4 on super 35, cropped to 2.35:1, was the absolute widest I could get, and required removing the Rangefinder. It still left me wanting a wider option when shooting interiors. It gives about the same horizontal field of view as a 28mm on s35. The 50mm f/1.4 and 85mm f/1.4 were both simple to use, and worked with the Rangefinder no problem. The 50mm was definitely the workhorse lens. Using an 85 seemed limited to large spaces and exteriors. I can see why the Helios 44 series is so popular among anamorphic adapter shooters. It’s an eminently useful length that’s long enough for bokeh effects and still wide enough to use indoors. On paper I was worried about not having a lens longer than 85mm, but in practice I never really felt I needed it.

Full manual is definitely the easiest way to go. Zoom lenses are tricky to use, since most of them change length while zooming. Primes are a much easier option. I experimented with a Canon 70-200, and it’s definitely not parfocal. In general, trying to focus past 135mm with an anamorphic adapter requires a zen-like patience, or a “good enough” attitude.

After shooting a few projects with various adapters, I really fell in love with the anamorphic look. It’s something I’ve wanted to take into my commercial work, but I didn’t feel an adapter was simple enough for high pressure work. I made the decision to add the three SLR Magic Anamorphot PL primes to my collection. I’ll post back here after I’ve shot a few projects with them.

What are your experiences shooting with anamorphic adapters? Let me know in the comments.